Coronation of a Reluctant Emperor, December 25, 800

The “Arm Reliquary,” kept in the treasury of the cathedral built by Charles the Great and the site of his tomb in Aachen. The reliquary contains the ulna and radius bones of Charles’ right arm. King Louis XI of France commissioned the reliquary in 1481.

[Charlemagne] was more than a conqueror; he was a great organizer and reformer. He divided his realm into counties, each with a comes (Latin for companion), or “count,” to rule it. To keep an eye on his subordinates, the king himself throughout his life made trips to all parts of his realm, arriving with little or no warning. He also sent out emissaries, called missi dominici, to travel a regular circuit and report to him on the state of his provinces and the needs of his subjects. These royal legates, who traveled in pairs—one a count, the other a bishop—were appointed for a year’s duty over a certain number of counties. Complaints against a local count or his administrators were brought before the emissaries, and they would send the complaints up to the king.

Among the reports brought back to Charles by his missi dominici were letters from provincial bishops. Because Charles saw how badly these letters were written, he began to fear that his clergy did not have enough Latin to understand the Scriptures. He thus established schools in every monastery and cathedral for the perfect teaching of the Latin tongue. The English scholar, Alcuin, who headed the school in Charles’s palace, called the “palace school,” was commanded to staff and oversee these many schools. Scholars from the British monasteries were brought over to Charles’s kingdom to train new teachers. Thus Charles brought the Anglo-Saxon renaissance of learning to the continent. END_OF_DOCUMENT_TOKEN_TO_BE_REPLACED 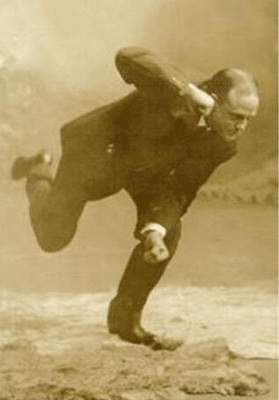 Folks in Norfolk, Virginia had gathered to witness an unusual funeral on January 16, 1920. The flamboyant evangelist, Billy Sunday, commended to hell one John Barleycorn, the “body” drawn off from a cheering crowd in a 20-foot horse drawn coffin. This was a large coffin made for one whom Billy Sunday thought a big enemy — perhaps man’s biggest enemy. “Good-bye, John,” cried Sunday. “You were God’s worst enemy. You were Hell’s best friend . . . the reign of terror is over.”

John Barleycorn was, of course, no man. He was a symbol of the “demon liquor” — “barley” and “corn” being the two crops from which whiskey is distilled. The 18th Amendment to the Constitution and the Volstead Act that enforced it had done Barleycorn to death — and temperance crusaders, like Billy Sunday, rejoiced in his damnation. END_OF_DOCUMENT_TOKEN_TO_BE_REPLACED

Portrait of Martin Luther as an Augustinian monk

Martin Luther did not intend to destroy the Catholic Church, nor did he intend to start a separate church. Luther wanted to reform the Church, to bring it back to what it was meant to be — the pure Bride of Christ.

Luther was not alone in wanting to reform the Church. Catholic humanists like Desiderius Erasmus of Holland, Thomas More of England, and the Cardinal Francisco Jiménez of Castile protested as loudly as Luther did against the problems in the Church. Even Cardinal Cajetan, who confronted Luther at Augsburg in 1518, carried on the same fight in the Roman curia. Unlike Luther, however, these reformers did not promote teachings that directly undermined the teaching authority of the Church.

Luther advocated several doctrines that were contrary to the Catholic Faith. His foremost idea was that salvation comes by faith only (sola fide) and not by any good works. Against the Catholic teaching that human nature, though fallen, is essentially good, Luther taught that human nature is wholly corrupt because of Original Sin. Since human nature is corrupt, only by God’s Grace (sola gratia), working through faith, can one be saved from eternal punishment. For Luther, however, Grace does not remove human sinfulness but only covers a person’s sins. END_OF_DOCUMENT_TOKEN_TO_BE_REPLACED