Louis-Philippe, “King of the French

It all came as a great and bitter surprise to King Louis Philippe. The 75-year-old citizen king no doubt knew why his “fellow citizens” were unhappy. Both in 1846 and 1847, there had been crop failures in France. Many industrial workers had lost their jobs, and the poor were suffering from harsh poverty and hunger. Then there were the intellectuals – the Liberals, socialists, and anarchists – who were openly attacking the government and calling for reforms, including a broadening of the right to vote.

It all came as a surprise to Louis Philippe, but it shouldn’t have. Throughout 1847, “Reform Banquets” had been held throughout France, complete with food, wine, and speakers stirring up the people against the government. A Reform Banquet was planned to take place in Paris itself on February 22, 1848. Louis Philippe and his prime minister, François Guizot, of course saw the banquet as a threat; but how great a threat it was, the citizen king did not fully understand.

A caricature of Louis Philippe, depicting his transformation into a pear. Louis Philippe, who came into power as the “citizen king” following a revolution that overthrew the last Bourbon king of France, Charles X, became increasingly unpopular through the 18 years of his government. By Honoré Daumier, following an original by Charles Philipon, who was imprisoned for drawing it.

Guizot had been a chief target of those reforming folk who attended the Reform Banquets. Though himself a Liberal who had been responsible for expanding public education more widely throughout France, Guizot was intensely hated by more radical Liberals, for he opposed extending the right to vote to more French citizens. It is not surprising, then, that he opposed the Reform Banquets and that he banned the banquet scheduled to take place in Paris on Tuesday, February 22, 1848.

On the morning of that Tuesday, Parisians woke to find notices posted in the city, announcing that the government had prohibited the scheduled Reform Banquet. The news produced an immediate reaction among Paris’s intellectuals and workers. Mobs gathered in the streets, demanding that the king dismiss Guizot. Rioting flared up throughout the city, especially in the poorer sections. A violent mob gathered at Guizot’s residence, broke some of his windows, and would probably have done more damage if the municipal guard and the police had not dispersed them. Louis Philippe beheld the uprising of his people with fear and surprise. Hoping to placate them, he dismissed Guizot.

END_OF_DOCUMENT_TOKEN_TO_BE_REPLACED

An Explosion that Inspired a War: 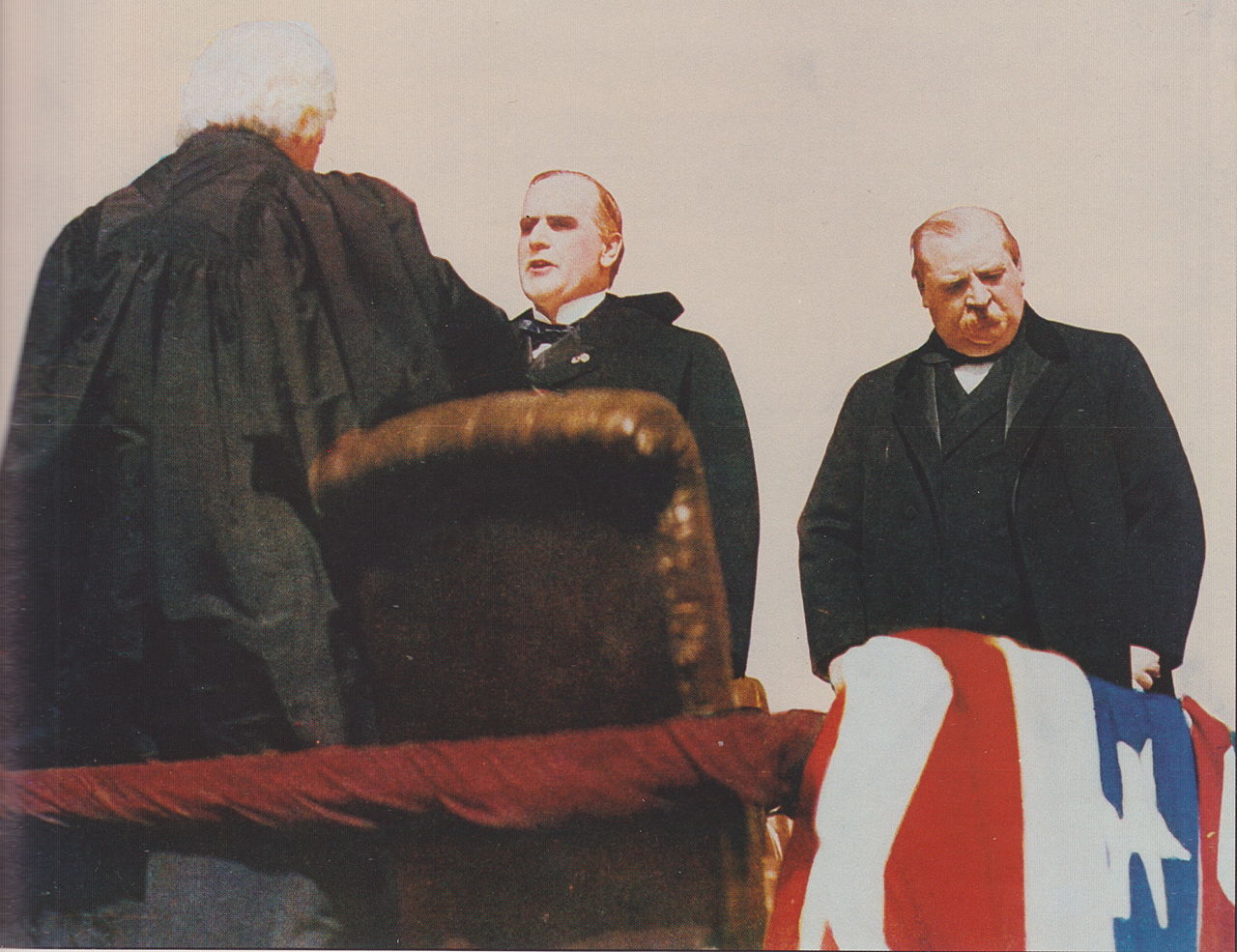 It was not because he opposed foreign intervention on principle that McKinley opposed intervention in Cuba. For instance, McKinley wanted to annex the Hawai’ian Islands, where wealthy owners of pineapple plantations (themselves the descendants of New England missionaries) had overthrown the last queen, Liliuokalani. In 1893, when the revolution that ousted Liliuokalani took place and Hawai’i became a republic under President Sanford Dole, President Harrison had introduced an annexation treaty into the Senate. President Cleveland withdrew the treaty after he discovered that the Hawai’ian revolution was not a popular uprising but the work of a few Americans with the aid of United States troops. Cleveland called the overthrow of Queen Liliuokalani an unlawful subversion and declared the United States could never countenance it. Such scruples did not bother McKinley. In 1897, the Republican president submitted to the Senate a second treaty for the annexation of Hawai’i. END_OF_DOCUMENT_TOKEN_TO_BE_REPLACED Elizabeth’s one serious rival for the English throne was her cousin, Mary Stuart, queen of Scotland. In 1559, Mary, then only 16 years old, had been married to Francis II, the king of France. When Francis died in 1560, Mary returned to Scotland. Mary was Catholic, but the situation in Scotland when she returned did not favor the Catholic Faith. The year before her return, John Knox, a follower of John Calvin, had convinced the Scottish parliament to abolish the Mass and organize the Scottish Church according to Calvinist beliefs. This, the Presbyterian Church, became the state or established church of Scotland, as the Church of England (also called the Anglican Church) had become the established church of England.

END_OF_DOCUMENT_TOKEN_TO_BE_REPLACED

The Bourbon Carlos IV had been king of Spain since 1788. A man of great physical strength and a firm believer in his divine right as a king, Carlos had nevertheless been a weak ruler. Taking little interest in governing, he had allowed his prime minister, Manuel de Godoy, to rule Spain.

King Carlos IV did not seem to have much family loyalty, for he had abandoned his Bourbon cousin, Louis XVIII, to make an alliance with revolutionary France. However, it was really Godoy, not the king himself, who had made the alliance with France. It also was Godoy who, in late 1807, had allowed the French general, Jean-Andoche Junot, to march a French army across Spain to punish Portugal’s king for refusing to close his ports to British ships. And it was Godoy who had signed a secret treaty at Napoleon’s palace of Fontainebleau in Paris to divide Portugal between France and Spain.

Junot led a large French army into Spain in late 1807. In December he entered the Portuguese capital of Lisbon, only to find that the Portuguese royal family had fled by ship to Brazil. With one of his armies in Lisbon, Napoleon got to thinking how inconvenient it was that an independent Spain lay between France and French-controlled Portugal. Only the Bourbon family, thought Napoleon, stood between him and the mastery of the entire Iberian Peninsula, and he schemed how to get rid of them.

Napoleon’s opportunity came in March 1808 when Spain’s Crown Prince Fernando, who was tired of Godoy, led an uprising against his father, King Carlos. On March 17, soldiers and peasants attacked Godoy’s residence at Aranjuez, near Madrid. They captured the minister and forced Carlos IV to dismiss him. Two days later, the royal court forced Carlos to abdicate, and the crown prince became King Fernando VII of Spain.

END_OF_DOCUMENT_TOKEN_TO_BE_REPLACED

Franklin Delano Roosevelt, during the campaign of 1932

The election of 1932 was one of the most pivotal in the history of the country. It would determine whether the United States would continue to be dominated by 19th century laissez-faire policies or follow the path of such countries as Great Britain and adopt a more active role for the central government in the economy. The latter course was the path of progressivism — of Wilson, La Follette, and the Bull Moose party. Americans had rejected progressivism in 1920, but now, with the specter of a long depression ahead of them, would they again embrace it?

A number of candidates vied for their party’s presidential nomination at the Democratic Party convention of 1932. Al Smith again sought the nomination, but his poor showing at the polls in 1928 dissuaded Democratic politicos from supporting him. The two main contenders for the nomination were Democratic speaker of the House, “Cactus Jack” Garner of Texas, and the governor of New York, Franklin Delano Roosevelt. Roosevelt was fortunate to have the support of the wealthy financier, Joseph P. Kennedy of Massachusetts, who raised funds for him. Kennedy did Roosevelt another good turn; he convinced the wealthy newspaper mogul, William Randolph Hearst, to turn his support to Roosevelt. Hearst controlled the California delegates to the convention, and his support meant their support. With California’s 44 votes in the bag, Roosevelt secured the Democratic nomination for president. END_OF_DOCUMENT_TOKEN_TO_BE_REPLACED