The following comes from our text, Lands of Hope and Promise: A History of North America. It continues the story of the firsts Mexican Revolution that we began last week and which you may read here. For ordering information on this and our other texts, please go here.

A group of creole intellectuals and army officers had been meeting secretly in Querétaro, about 200 miles northwest of Mexico City. Calling themselves the Academia Literaria (Literary Academy), the group’s aims were ostensibly literary; but their work was really political, for they were working for the overthrow of the gauchupines and a Mexico indepen­dent of Spain (though ostensibly at least still faithful to Fernando VII.) Among their number were the army officers Ignacio Allende and Juan Aldama, and a priest, the 57-year old cura of the nearby village of Dolores, Miguel Gregorio Antonio Ignacio Hidalgo y Costilla.

Padre Hidalgo had long had a reputation for radicalism. Having stud­ied at the Colegio de San Nicolás in Valladolid, not far from Mexico City, he had been ordained a priest in 1778 and later served as rec­tor of San Nicolás. A French scholar, Hidalgo had been drawn to the works of French Enlightenment thinkers, such as Rousseau and Montesquieu — an interest he shared with a close friend, Manuel Abad y Queipo. Because of this interest, in 1800 accusations of heresy were leveled against Hidalgo and Abad, and the Inquisition secretly investigated them both in 1800. Hidalgo, it was charged, among other errors, denied the virgin birth, the perpetual virginity of Mary, and the sinfulness of fornication. (That Hidalgo had children by two different women lends credence to the last charge.) But nothing came of the investigation, and both Hidalgo and Abad were never formally accused of heresy.

Hidalgo addresses the peasants from the church steps in Dolores.

When in 1803 Hidalgo became cura of the village of Dolores in Guanajuato, he took great interest in the material welfare of the Indians. Leaving the spiritual concerns of the parish to one of his assistants, Hidalgo worked to promote the cultivation of grapevines and olive trees among the Indians and introduced the silk worm. He taught the Indians to make pottery and tan leather — all industries forbidden in America by Spanish law.

By August 1810 Hidalgo and the Querétaro group had a plan in place. In a coup d’état they would capture key Spanish government officials and set up a revolutionary govern­ment. The date set for the coup was October 1. One of the members of the group, however, turned traitor and revealed the plan to the government. On September 16, an order was issued to seize all the members of the Academia Literaria.

Learning of the betrayal, Doña Josefa Ortiz, the wife of the corregidor of Querétaro, but a supporter of the revolutionaries, hurried to Dolores and warned Hidalgo. This was the crucial moment for the cura — would he flee, would he surrender and beg clemency, or would he call for resistance? Hidalgo chose the last course. Ringing the bell of the village church, he gathered his Indian parishioners, and from the pulpit, he gave the grito de Dolores, the “Cry of Dolores,” which, according to one account, reads:

“My friends and countrymen: neither the king nor tributes exist for us any longer. We have borne this shameful tax, which only suits slaves, for three centuries as a sign of tyranny and servitude; [a] terrible stain which we shall know how to wash away with our efforts. The moment of our freedom has arrived, the hour of our liberty has struck; and if you recognize its great value, you will help me defend it from the ambitious grasp of the tyrants. Only a few hours remain before you see me at the head of the men who take pride in being free. I invite you to fulfill this obligation. And so without a fatherland or liberty we shall always be at a great distance from true happiness. The cause is holy and God will protect it. . . . 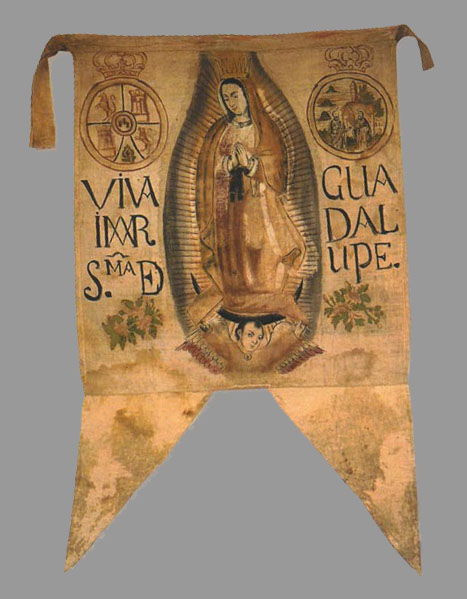 Five hundred to 600 men gathered around the priest, and as this band marched from village to village, hundreds and thousands more joined them. By September 21, 50,000 Indians, mesti­zos, and a few creoles were marching with Hidalgo under a banner of Our Lady of Guadalupe that Hidalgo had taken from a church. Armed, some with guns but more with farm tools, the peasant army brutally slaughtered any Europeans, gauchupines, or creoles they found in the villages. Hidalgo (now called “Captain General of America”), Ignacio Allende, and Juan Aldama led this ill-disciplined and rag-tag mob toward the city of Guanajuato. 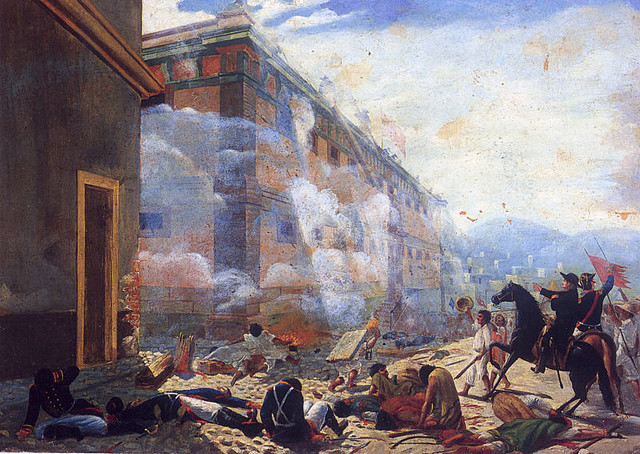 Battle of the Alhóndiga de Granaditas

When the army reached Guanajuato on September 28, Hidalgo pledged that he would spare all Europeans if the city surrendered; but the com­mandante had heard of the atrocities committed by the peasant army and refused. Gathering all the royalists and the city treasury into the Alhóndiga de Granaditas (a building to store grain) the com­mandante prepared for a siege. At first the royalists held off their assailants, firing down from the stout stone walls of the granary on the ill-disciplined peas­ant army. The Alhóndiga was strong enough to hold off the insurgents but for one weak point — its great wooden door. Hidalgo’s force set fire to the door and broke into the granary. A bloodbath followed.

“When the insurgents had taken the Alhóndiga,” wrote Lucas Alamán, an eyewitness who survived the slaughter, “they gave rein to their vengeance. In vain those who had surrendered begged on their knees for mercy. . . . The building presented a most horrible spectacle. The food that had been stored there was strewn about everywhere; naked bodies lay half-buried in maize, or in money, and everything was spotted with blood.”

the Time of Hidalgo

A setting for the Mass ordinary by Mexican composer, Manuel Arenzana (ca. 1762-1821)