A year later, Pope Julius proclaimed a jubilee indulgence to fund this great project. An indulgence is a full or partial remittance by the Church of the temporal punishment for sins (such as one suffers in Purgatory) following the forgiveness offered in the Sacrament of Penance. Julius’s indulgence did not differ from indulgences issued by earlier popes. To obtain the indulgence, one had to be truly repentant, receive the Sacrament of Penance, and perform a good work. In the case of the jubilee indulgence, the good work was contributing money to the building of St. Peter’s Basilica. It was not unusual for the Church to issue indulgences for the funding of churches—which was considered a very holy work. Yet, this jubilee indulgence, in a few short years, would have tragic results that no one, including the pope, could foresee in 1507.

A conception of how the original St. Peter’s Basilica may have appeared

Pope Julius II was a bundle of contradictions. Taking his duties as the head of the Church seriously, he fought against abuses, like simony and nepotism, even calling the Fifth Lateran Council in 1512 to reform the Church. All the same, before becoming pope, Julius had engaged in bribery to make sure he became pope—and, when he became pope, he personally led armies in battle to protect and extend the political power of the Papal States.

Pope Julius II focused more on the temporal than the spiritual good of the Church—a problem that had been afflicting the entire Church since the days of the Avignon popes. By the 16th century, too many churchmen seemed to have forgotten their spiritual offices in their pursuit of political power and wealth. Benefices did not go to the holiest or even the most learned men, but to the wealthiest and most powerful. Bishops, therefore, often cared little for the spiritual good of those entrusted to them. Too many of their priests were little better—and many were, moreover, ignorant and immoral. Even many monks and friars were living lax lives of pleasure and self-indulgence.

A 1477 portrait of Cardinal Giovanni Della Rovere (left) — the future Julius II — with his uncle and patron, Pope Sixtus IV, who patronized him

Far worse was that the Roman curia and the popes themselves were in large part the cause of the ills of the time. To become a bishop, for instance, one had often to pay a large sum of money to Rome—which meant only the richest (or those with the richest friends) would be made bishops. The pope, too, often allowed one man to be the bishop of more than one see— something forbidden by Church law—or to be bishop of a see in a country he would never visit. Churchmen at all levels practiced nepotism and simony. In Rome itself, cardinals openly lived immoral lives, while the popes spent their energies in extending their political power or patronizing the arts.

In those days, one still could find holy priests, conscientious bishops, and strict monasteries. But the Church as a whole was sick. The laity suffered from ignorance and immorality. Some humanist scholars, particularly in Germany, openly mocked the Church and churchmen. Kings and princes thought chiefly of their personal power and wealth and making themselves almost the absolute lords over the Church in their regions. 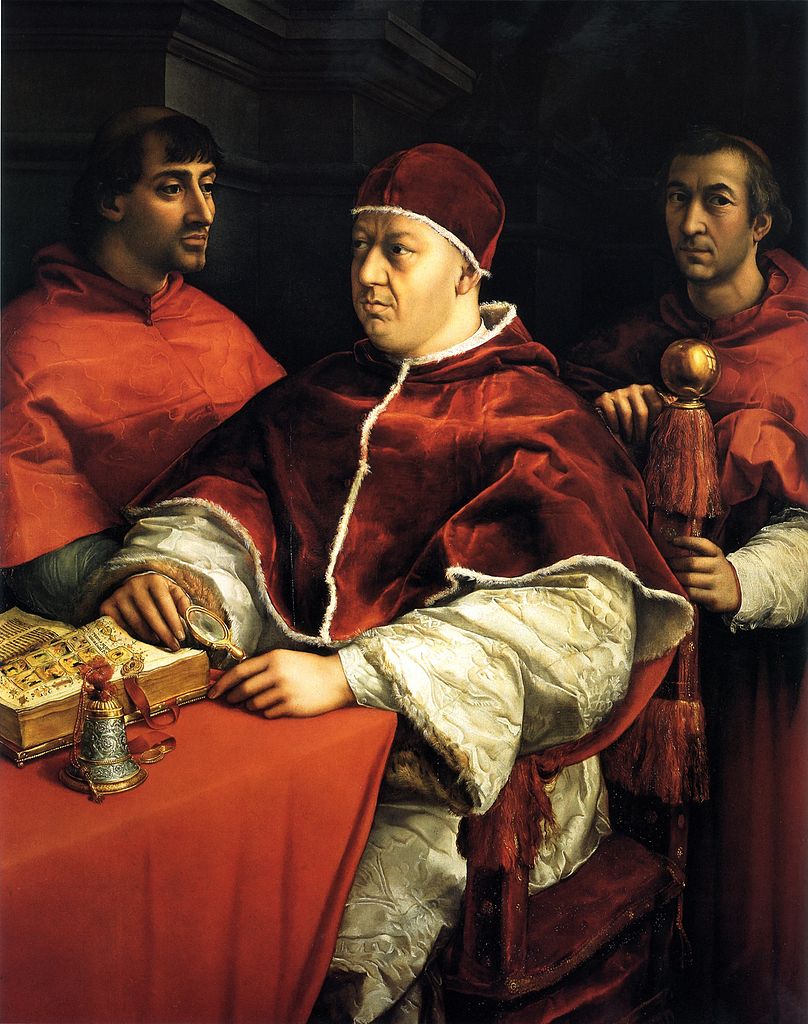 Pope Leo X with cardinals, who were his cousins

Many believers, both lay and clergy, believed that a reform of the Church was necessary. They sought a reformation, like the great medieval reformation. But who would lead such a reform movement? Though Pope Julius II called strongly for reform, he died in 1513, four years before the reform council he had called ended. Julius’s successor, Pope Leo X (a Medici), was too taken up by the arts and pleasure seeking to pay attention to the spiritual good of the Church. (It was told that when he became pope, Leo said, “Let us enjoy the papacy, since God has given it to us.”) Though there were many critics of the Church, nowhere in Europe could be found a king, a bishop, or a religious order to lead in the reform of the Church.

But Christendom was waiting for a reformer—and when he came, he would find a host of people to follow him, wherever he might lead.

A Meeting of the Sacred and Profane

A song called L’homme Armé (“The Armed Man”) was very popular in the late 15th and early 16th centuries — so popular that composers used it as the basis for mass compositions. Imagine going to Mass and listening if you could detect the tune of your favorite song in the Kyrie, Gloria, Sanctus, or Agnus Dei! This is what people of the time did. The video, below, presents a performance of the original song, L’homme Armé, followed by a Missa L’homme Armé, composed by Guillaume Dufay about 1460.