The Prussian strategy had been so well planned that the German armies moved with the precision of a machine. By mid August, the Prussians forced the French general, Marshal Patrice de Mac-Mahon, to abandon Strasbourg and withdraw from most of Alsace. On August 18, another Prussian army defeated Marshal Achille François Bazaine at Gravelotte in Lorraine and forced him to take refuge in the fortified town of Metz. Though the French fought bravely through several bloody battles, their lack of preparation brought them defeat after defeat at the hands of the Prussians.

With Bazaine and over 170,000 men unable to leave Metz, Emperor Napoleon thought the best course of action would be to concentrate the rest of his forces around Paris. But as the emperor, who was with Marshal Mac-Mahon, told the general to prepare to withdraw toward the capital, a telegram arrived from Paris, from Empress Eugénie. Paris was in an uproar against the empire, Eugénie told Napoleon; if he should enter the capital, his throne and even his life would be at stake. The people of Paris wanted Napoleon and Mac-Mahon to march to Bazaine’s aid, not to retreat to Paris. Napoleon read this note in despair; he had no choice, he thought, but to do as it said. The army would not retreat to Paris but attempt to rescue Bazaine.

But Napoleon and Mac-Mahon discovered it was be impossible to relieve Bazaine. So, instead of moving toward Metz, they followed the River Meuse northeastward, toward Belgium. At Sedan, a town near the Belgian border, Mac-Mahon’s army on September 1 came to battle with the Prussians. The Prussian artillery did deadly work on the French. Throughout the day, Prussian reinforcements arrived, while the French were cut off from all help. By day’s end, Napoleon called off the French attacks. The next day, September 2, the French emperor surrendered his army of over 100,000 men and himself to the Prussians.

When news of Napoleon’s defeat and capture reached Paris on September 4, mobs gathered and broke into the chambers of the Legislative Body, crying, “Down with the Empire! Long Live the Republic!” With the help of an American dentist, Empress Eugénie fled Paris, while the republicans Léon Gambetta, Jules Ferry, and Jules Favre led the mob to the Hôtel de Ville and there, declaring the end of the empire, proclaimed France a republic. A general, Louis Jules Trochu, was made head of the new government, called the Government of National Defense, though Gambetta was its chief inspiration.

With Bazaine bottled up in Metz and Mac-Mahon’s army captured, no French army now stood between the Prussians and Paris. To bring the war quickly to an end, Bismarck offered an armistice and met with representatives of the Government of National Defense. Though the new French government was open to peace, it objected to Bismarck’s demand that France give up Alsace and much of Lorraine to Prussia. On September 6, Jules Favre, who represented the French government, declared that France would not “yield an inch of its territory nor a stone of its fortresses.” The talks broke off, and the French government called on recruits from all over France to rise in defense of their country. 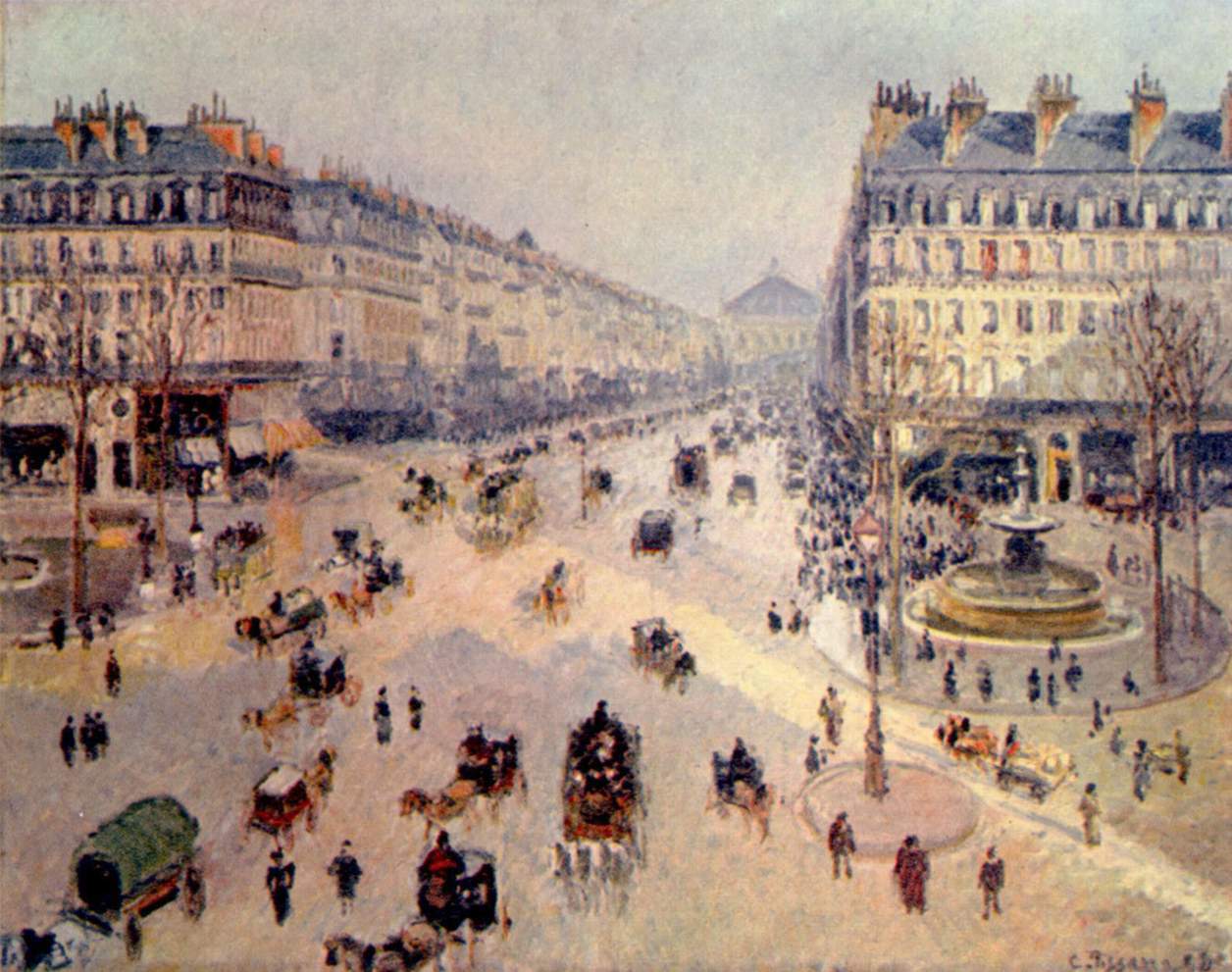 Avenue de l’Opera — one of the wide, spacious avenues constructed by Napoleon III in Paris

With the breaking off of peace talks, the Prussians prepared to place an “iron girdle” around Paris. On September 19, the siege of the capital began. But while 200,000 German troops were gathering around Paris, elsewhere in France new armies were forming. Every French male between 20 and 40 years old was ordered to serve, and older men had to enter the reserves. In this way five armies, together numbering over 500,000 men, were formed. To direct the war effort, Gambetta escaped from Paris in a hot air balloon on October 7 and went to Tours, where he took control of the government of France.

Despite the bravery and patriotism shown by the new French armies, they were victorious in only one battle—at Coulmiers, where they defeated a Bavarian force. October 27 brought more bad news to the French; Bazaine had surrendered Metz and his entire army to the Prussians, thus freeing up the Germans who had been besieging Metz to fight elsewhere in France. So, at the end of November 1870, Paris lay under siege while the hope that the new French armies could drive off the Prussians grew ever dimmer.

Music of the Second Empire

Paris under Emperor Napoleon III became a center for the arts, including music. Jacques Offenbach, a German Jew from Köln, flourished in the Paris of the Second Empire, writing primarily operettas — though, having come originally from Germany, he fell out of favor in Paris during and after the Franco-Prussian War. The following is an aria from his operetta, La Périchole, first performed in Paris in 1868.