When Fages ignored his complaints, Fray Junípero decided to appeal to Mexico City. He undertook the long journey by sea to the capital in 1773 and there met with the viceroy, Fray Don Antonio María Bucareli y Ursua, a member of the lay Order of St. John of Jerusalem (the Knights of Malta). The viceroy listened sympathetically to Serra and asked him to write down his recommendations for California. Bucareli adopted almost all of Fray Junípero’s recommendations in the regulations for California he promulgated shortly after Serra’s return in 1774. 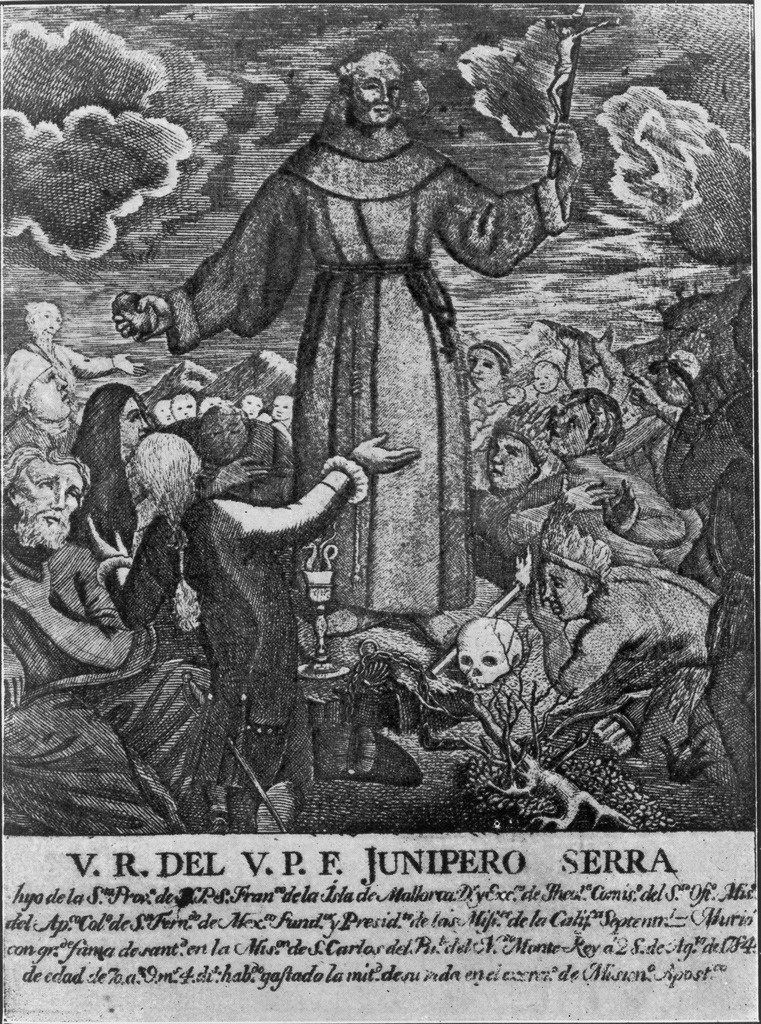 But Fray Junípero’s difficulties were not over. Isolated as it was among the warlike Indians of the region, all was not well at Mission San Diego. Moreover, the mission stood some four miles from the presidio, too far for a quick response in case of attack; there had not been enough water to support both fortress and mission in the same location. In the autumn of 1775, two Christian Indians — Carlos, the chief of the mission Indian village, and his brother, Francisco — robbed some old pagan women of their seed and fish. Fearing punishment from the friars for their crime, Carlos and Francisco fled to the pagan villages. With six others, Carlos went from village to village, stirring up revolt. Then on November 4, about 600 natives surrounded the mission and attacked it, setting fire to several buildings. Awakened by the crackling of flames and the smell of smoke, Fray Vicente Fuster and others ran to the guardhouse. The mission’s carpenter, Urcelino, grabbed a musket but was
struck with an arrow. “Ha, Indian, you have killed me,” he cried. “God forgive you.” The other missionary, Fray Luis Jayme, did not run to the guardhouse. Instead, he approached the attackers, with the customary greeting, Amar a Dios, hijos (“Love God, children”). The Indians seized Fray Luis and took him to the arroyo outside the mission compound. There they stripped him of his robes, shot him full of arrows, and pounded his head and
face with stones and hunting sticks until he was unrecognizable. The war party continued their assault until daybreak, when they withdrew.

Serra rejoiced when he heard of Jayme’s triumph. “Thanks be to God,” said the padre presidente, “now indeed that land has been watered [with blood]; certainly now the conversion of the San Diego Indians will be achieved.” Yet, Fray Junípero feared for Carlos, who had led the assault on the mission. The new governor, Don Fernando Rivera y Moncada, had seized the chieftain in the church at San Diego, where he had sought sanctuary. This was a violation of the sacred right of sanctuary, or so Fray Junípero affirmed — a crime that, under Church law, brought on automatic excommunication. Serra sought mercy for Carlos, but, he knew, the governor would not heed one who had declared him excommunicated. Fray Junípero therefore, appealed to the viceroy, Antonio María Bucareli y Ursua. “As to the murderer,” Serra wrote Bucareli, “let him live, in order that he should be saved — which is the very purpose of our coming here. . . . Give him to understand, after a moderate amount of punishment, that he is being pardoned in accordance with our law which commands us to forgive injuries; and let us prepare him, not for death, but for eternal life.”

Carlos was not executed. Four years later, he and other Christian natives joined a larger number of pagans and attacked an Indian ranchería, killing 12 of the inhabitants. For this crime, the governor, despite Fray Junípero’s pleas for mercy, banished Carlos to San Blas for six years.

Music for Mass in the California Missions

Ignacio de Jerusalem y Stella (1707-1769) was an Italian baroque composer who expatriated to Spain and then Mexico, where he became director of the Coliseo, a theater in Mexico City.  In 1750, he became the chapel master at the cathedral of Mexico City. Jerusalem’s music was performed in the California missions, by native musicians trained by the Franciscan missionaries. The music of the Mass we present here (the Mass for Eight Voices in D Major, performed by the group, Chanticleer) was long thought lost until a manuscript of it was discovered in the archives of Mission San Fernando in California.